Oh no … where did the summer go?

I hope you will be able to join us.

If you wont be there good luck with any races you have planned and see you next year – from April 2018.

Here we are again!

Hello, It’s Wednesday night already and the weather is PERFECT for FITNFUN this week.

We meet throughout the summer holidays so don’t be put off if you miss a week!

We had a lovely weekend at the Wetherby Food Festival and met some  FitNFun friends there. We will be at Horsforth food festival with our Emma Bright and The Super Food Fight book this weekend if you’re around.

You can find out more about The Super Food Fight on this link to Emma’s Blog. https://www.thesuperfoodfight.co.uk/emma-s-blog.

It’s your official weather forecaster here to say that the sun will be shining tomorrow night – around 19 degrees at 7pm so the sunshine is back on side.

It was great fun running in the rain last week but we missed out refreshments afterwards as we were too wet to dare enter the bar!

Hopefully see you all at 7.30pm tomorrow for more fitnfun.

Don’t forget we carry on throughout the summer holidays until the dark nights draw in from September. If you haven’t been yet there is still time to enjoy our free weekly group. If you have sponsor money would you mind bringing it tomorrow for CRUK Race for Life.

Oh What a night !

I wanted to post an official thank you to these amazing ladies who joined me last night for a wet and wild run through Hetchell wood.

Someone forgot to tell the weather it’s almost July and that the sun should still be shining! Felt more like November as we ventured out in freezing rain. Olivia (aged 9) and I really did not expect to find anyone else crazy enough to join us but were really pleased and genuinely surprised to find these two lovely ladies waiting in their car at the sports club.

We were joined by two brand new members Lisa and Mia Norris – who did not make it back to the sports club and left us at Church Lane to run home to dry out. I think I weighed 3 times more with my wet clothing this week but we had a brilliant time splashing around in the mud.

Total respect to you ladies who braved the night! Beth and Ruth, Olivia, Mia and Lisa. Hope you’ve dried out by now. Who knows what next week will bring! Have a good week.

Healthy message on the menu with Emma Bright and The Super Food Fight – a new book to support kids healthy eating. Serious FUN!

Hayley Dodsworth and Donna Harrison, two of the FitNFun team, have together written a book to support parents in the eternal mealtime battle ‘Err… I’m not eating that!’

We’ve all heard this said by our children at some point and know how frustrating it can be for the everyone involved. These local ladies came up with a proactive solution to the problem and so the Super Food Fight concept was established. 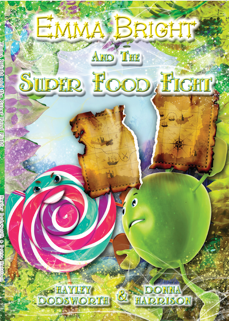 Hayley’s daughter Emma, also a FitNFunner, was the inspiration for Emma Bright and The Super Food Fight when, at around 5 years old, she began to refuse foods at the meal table. The knock on effect of this was that she was negatively influencing her younger sisters and this resulted in tears, tantrums and a waste of time and money. Mealtimes were anxious and unhappy! Rather than make separate meals or get angry Hayley told tall tales at the meal table about some super hero foods to inspire her children to try a wider range of foods.

This resulted in happier, healthier mealtimes with Emma and her sisters, Anna and Olivia Dodsworth, enjoying their meals with their parents. The knock on effect of this was the improvement in sleep, behavior and concentration.

Bardsey Primary School supported the local mum’s by reviewing the early drafts of the book and adding feedback from a teachers point of view. Then many of the children in the school and local area took part in the market research to establish whether the kids involved enjoyed the story and were learning from the concept. It was a 100% positive outcome and so the book was illustrated and the website created and the characters brought to life online: www.thesuperfoodfight.co.uk

Six months on and almost 1000 copies of Emma Bright and The Super Food Fight have been sold. Reviews have been 100% 5 stars and feedback has been unbelievably positive. Take a peek and add a place for Emma Bright at the table and make mealtimes happy, healthy and bright!

Background: Hayley Dodsworth studied a nutrition course with the Open University, closely followed by a writing course, then a children’s writing course. She enlisted her friend, Donna Harrison, Drama Teacher and parent to Peter and Lyla Harrison, to add a voice to the super hero food characters in the book, plus the meddlesome and mischievous Treats in the story.

The story took over 7 years from initial idea to published book but Hayley and Donna both agree it was worth the hard work. “We were very determined and wanted our finished book to be equal to, if not better than, any other book out there on the book shelves. It adds a new fun dimension to educating primary age school children about healthy eating and that’s being reinforced by all our super food fans. You can read our reviews on the website to find out more: www.thesuperfoodfight.co.uk/reviews

Emma Bright and The Super Food Fight is available from Hayley Dodsworth on 07981 554853, email: dodsworthharrison@gmail.com or pick up at copy at the Bardsey Sports Club, Keswick Lane, each Wednesday or from the online book shop: www.thesuperfoodfight.co.uk/shop

Hurray the sun is out, the sky is blue

The sun has decided to join us so it’s going to be a lovely FitNFun – walk – jog – run tonight so get down to the Sports Club on Keswick Lane for 7.30pm if you can make it.

We are looking forward to the cool and refreshing drink we will earn as our reward afterwards.

Hope you can join us.

We did it! 5km #RaceForLife Leeds

Well done to the Super Food Fight Team for their amazing 35 minute 5km run on Sunday which has so far raised £370 for Cancer Research Uk Race For Life.

To read all about it see Emma-s-Blog attached and take a peek at the fun photos from the day.

Thank you for sponsoring us – please bring along your donation asap to the Sports Club in Bardsey.   If you would still like to donate you can  add to our Just Giving Page below.

See you tonight for a windy FitNFun but it’s meant to be dry and bright.

If you know of any upcoming events for families please let us know and we will try and make an appearance in fun food costumes to brighten up the day!